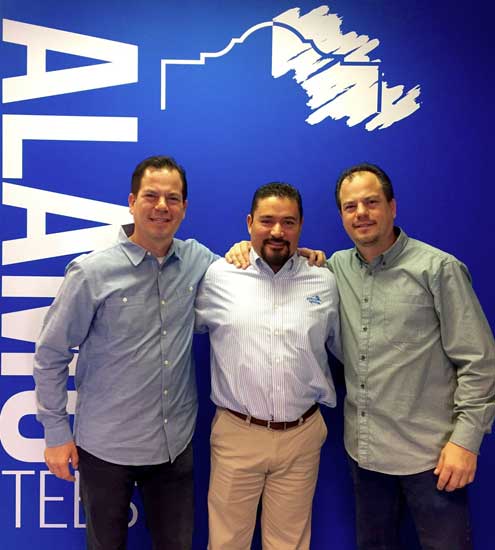 In 1993 James was working as a cashier at Stein Mart when a friend told him about a job opening. James decided to take the opportunity and began his career at Alamo Tees & Advertising. He went from labeling price tags onto t-shirts and caps to packing orders for pre-printed shirts for HEB and Albertsons until he was head of that small department. The owners Mark Wilson and Tom Banks saw his hard work and dedication and promoted James to production manager for the warehouse and screen printing department. He was a great leader and manager and treated the company as his own. James worked diligently and enjoyed the rush and tackling the daily challenges while treating his coworkers like family. His home life is very family oriented as well as he enjoys traveling with his wife and spending quality time with his 17 nieces and nephews.

John joined the company in 1995. He started in the back of the screen printing department catching shirts from the dryers. Soon after, he became part of the printing team for about a year. Management took note of his skills and hard work and promoted John into the office. John managed and trained merchandisers for the retail side of the business. He also bought and maintained inventory of licensed sports product and strategized with retailer to come up with a merchandising plan. Not only does John seek adventure in the workplace, but he also enjoys going to the movies, swimming, and hiking with his daughters. He also likes playing poker, watching live music, and participating in church activities.

Art was the third to join the company after graduating from St. Mary’s University in San Antonio. He began his work in the retail department of Wings Sportswear which is a division of Alamo Tees. Art worked with division buyers and store managers throughout the country. In his down time, Art enjoys traveling with his wife and family. When his kids were younger he helped coach their teams and now enjoys watching them play sports in High School. He also enjoys cheering on his favorite sports teams including the Dallas Cowboys, San Antonio Spurs and the Texas Rangers.

In 2003 a group of 6 employees bought out the original owners. After a few partnership changes; James, John and Art remain as partners of Alamo Tees & Advertising. Their hard work does not go unnoticed, and they truly believe in taking care of their customers.

“Anyone can decorate a shirt. We give them great customer service with people that have years of experience. We stand by our work because we know that we are the best in San Antonio.” -James Lawson, President of Alamo Tees & Advertising